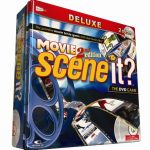 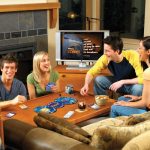 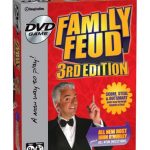 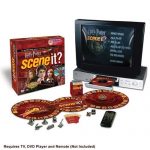 Scene It? Deluxe Harry Potter Edition
0 out of 5

All new content from such films as “Walk the Line”, “King Kong”, “The Devil Wears Prada” and more
Features questions, characters, and clips from both new and classic films of the silver screen
Includes a bonus DVD

With two game DVDs, Scene It? Deluxe Movie Edition has more of the real film clips, trivia questions, and puzzlers that have made Scene It? the hottest-selling game in the world. Relive the greatest movie moments from Hollywood’s hottest films like Titanic, Shrek, and Fargo. Game contains Collectible Tin, 2 DVDs (includes bonus DVD), Flextime Game Board, Party Play, 6 Collectible Metal Tokens, 200 Trivia Cards, 30 Buzz Cards, 4 Reference Cards, 1 Six-Sided Die, 1 Eight-Sided Die. For 2 or more players, ages 13 and up.
The popular board game that has players watching video clips and shouting out answers is now available in an upgraded movie theme. This second edition of Screenlife’s Scene It? Movie game is chock full of questions, characters, and clips from both new and classic films of the silver screen. From older films like E.T. and Casablanca to new favorites such as The Devil Wears Prada and Ocean’s 11, the game asks challenging questions about characters and scenes.

Pop the game’s DVD into your player to start the star studded fun. Loaded with new clips and puzzles, this updated version touches on oversized apes to princess brides and all things in between. There are over 1,000 questions on the 160 trivia cards, so even if you see the same snippet from the 180 on the DVD during the same game, the question about that scene will be different. Special technology randomizes the order of the clips to ensure fresh fun each time the game is played.

The interactive game board can be spread out for longer games, or folded for a smaller board when you don’t have a lot of time (or that many players). To help you move around the board there are four metal tokens with movie genre themes (wind-up chatter teeth, a heart-shaped box of chocolates, a car in mid flight, and a hand reaching from beyond the grave), one six-sided die to determine how many spaces to move, and one eight-sided die that determines the category to be played. Once the dice have been rolled, clips are watched, questions are asked, and it’s revealed just how much you know. Use memory, logic, and your pop culture knowledge to answer various challenges about famous quotes, imaginative characters, and the actors who brought them to life. Categories range from Quotables and Who Am I? to Soundclips and more.

Whether you attend new releases on opening weekend or rent the classics, this game is easy enough to learn and fun enough to play for everyone. The casual movie watcher can answer questions by using puzzle-solving skills or by paying close attention to the movie clips. There are also 30 Buzz cards available to help (or occasionally hinder) progress. If these reasons aren’t enough to tempt you into a game on your own, then co-produce a blockbuster with a friend or family member by playing in team mode first.

A TV, DVD player, and remote control are needed but not included. The DVD includes an on-screen demonstration of game play.

What’s in the box

All new content from such films as “Walk the Line”, “King Kong”, “The Devil Wears Prada” and more
Features questions, characters, and clips from both new and classic films of the silver screen
Includes a bonus DVD
Re-live great movie moments as you race each other around the board – Be the first to make the Final Cut and win the game
If you’re really into movies then let Scene It? Movie 2nd Edition put your movie trivia knowledge to the ultimate test