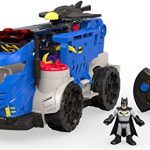 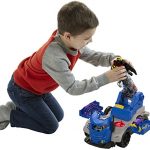 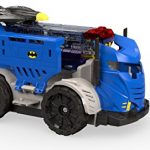 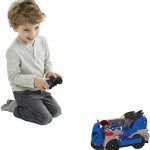 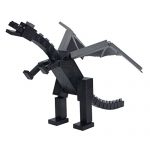 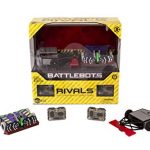 HEXBUG BattleBots Rivals (Tombstone and Witch Doctor)
0 out of 5

Batman and the rest of the Justice League keep an eye out for danger from their command center, ready to jump into action at any moment! with the Imaginext DC Super Friends RC Mobile Command Center, young Super Heroes can steer the action from the palms of their hands with the remote control, sending the command center forward and in a backward turn. At the press of the transform button, the Batwing platform rises, revealing the full command center with projectile launcher, jail, and cockpit for Batman. Under attack by Super-Villains? Press the trigger on the projectile launcher to fire missiles and send those criminals running for cover! But they won’t get away that easily—push the launch button on the remote to launch the Batwing and take to the skies! Once Batman has the bad guys in his clutches, lock them up in the secure jail! This transforming, crime-fighting machine is the perfect home base for your young Super Hero to create all sorts of action-Packed, crime-fighting adventures with their favorite Caped Crusader! Imaginext Imagine What’s Next! (Villain figures sold separately.) Where development comes into play: Cognitive: Imaginative play and storytelling helps to develop kids’ language skills and can foster an early love of reading.
Incudes RC Mobile Command Center, remote control, projectiles, jail, and Batman figure
Remote steers Mobile Command Center forward, reverse turn & transforms from vehicle to playset!
Turn Power Pad or push transform button on remote to raise the Batwing platform!
Press launch button on remote to make Batwing take to the skies! Or launch manually by pressing the small Power Pad on the platform.
3…2…1…FIRE! Push trigger on launcher to fire projectiles!