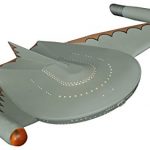 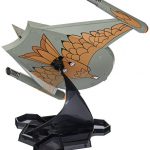 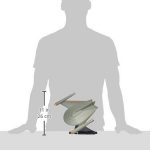 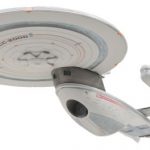 A Diamond Select Toys release! For the 50th anniversary, DST is going back where it all began, to the original Star Trek television series, to make a brand-new ship in the Starship Legends line! With its low profile and its distinctive underbelly markings, the Romulan Bird of Prey is as menacing and mysterious as the Romulan Empire it served. Measuring 9 inches long with a wingspan of 12 inches, the Bird of Prey features dialogue and sound effects taken straight from the original television series, as well as lights that are activated with the sounds, and can also be turned on permanently. The ship is packaged in a full-color window box, with a Try-Me feature. Designed by Art Asylum!.
Marking the 50th anniversary of the Original Star Trek series
Measures 9″ long with 12″ wingspan
Features dialogue and sound effects from the Original Series
Includes lights that can be sound-activated or left on
Full-color Try-Me window box