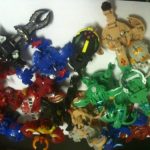 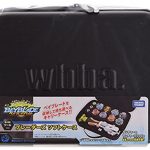 Beyblade Burst B-68 Bladers Soft Case
0 out of 5

Bakugan battle brawlers are here! Answer the call to brawl and decide the fate of the galaxy! Magnetic marbles POP open into power Bakugan warrior action figures when they roll onto the real metal Gate Cards! Use strategy to place your metal Gate Cards as each card affects the battle differently. Master your shooting skills to roll your Bakugan into battle. Styles are selected at random when shipped.
The popular and fun anime TV series “Bakugan Battle Brawlers” has spawned this strategic game that pits a variety of “Bakugan warriors” — such as “Juggernoids,” “Fear rippers,” and “Robatallians” — against each other for points. With this Bakugan Starter Pack, kids 4 and above will enjoy the challenge of earning points by rolling their Bakugan (or shooting them from a launcher) onto magnetic cards where the plastic spheres burst open to reveal the fearsome warrior apparatus inside. Kids will also love the way the Bakugan transform suddenly into warrior mode, and fans of the show will have an especially good time with the game.

Inside each plastic sphere is a fearsome warrior apparatus. View larger.

There are many colors and varieties of Bakugan to collect. View larger.

The Good: Wide variety of Bakugan make them fun for kids to trade and collect

The Bad: No instructions with some toys

In a Nutshell: Clever and exciting interactive game that kids will enjoy even if they’re not familiar with the TV show At a Glance
Ages: 4 and up

NOTE: This Bakugan Starter Pack includes a random selection of three Bakugan warriors. It also includes three metal cards and instructions. It does not include the optional Bakugan Launcher.

Ready, Set, Play!
The mission of Bakugan game play is to battle against other Bakugan to win the points awarded on the cards by getting your Bakugan to land on card. Players will love pretending to be one of the various characters in the show, such as the fiery 12-year-old leader “Dan” or the wise “Marucho,” and they gain a deeper understanding of the cards and warriors as they play.

The Starter Pack includes instructions, making it an ideal way for newbies to get started with this fun and exciting game. The game itself is fairly straightforward, but if your child has never played before, you might have to help him or her to understand the rules — after reading and understanding them yourself. While some of the plastic Bakugan pieces are small and could easily get lost, others, like the Bakugan Deka, are as big as a softball.

The Starter Pack comes with three Bakugan and three cards — perfect for kids who are new to the game and who want to try it out. The illustrated instructions are easy to follow.

Exciting Magnetic Action
The Bakugan come in lots of colors and varieties that make them fun to collect and trade. Most of them are pocket-sized and easy for your child to carry around and bring over to their friend’s houses. Having a magnet that activates the warriors is a clever idea that adds excitement to the game. The Bakugan Launcher (sold separately) is a great accessory, with three shooting modes (“curve,” “angle, and “distance”), but it doesn’t come with any instructions.

Room for the Imagination
We like that this that this game combines skill (aiming your Bakugan) with strategy (placement of the cards). We also enjoyed the way the warriors pop open on the magnetic cards — although sometimes they do it even when they don’t land on the cards. Being unfamiliar with the TV show, we felt a little lost at first in the world of Bakugan. But with the help of the colorful, animated Bakugan Web site, we got the gist of what the game is about and how to play. Our attempts to fire the launcher proved somewhat difficult and instructions would have helped. But the launcher isn’t necessary. Kids can simply roll the Bakugan like marbles for a fun and action-packed game with their friends.