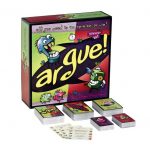 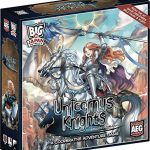 Argue is the fun, topical game where all you need is an opinion to win!Deal out the unique Player Assignment Cards to determine which topic to argue, who you’ll argue with and which side of the argument you are forced to take (even if you don’t agree with it).Two players have three minutes to argue a conversational, random topic from five categories and the other players vote on who argued best!For 3 to 10 adult players.Contains Argue Topic Cards, Player Assignment Cards, Advocate/Devil’s Advocate Cards, Point Cards, Timer, and instructions.
200 Argue Topic Cards
1000 Topics of Argument
Conversational topics create social interaction and fun
Ice breaker and laugh maker